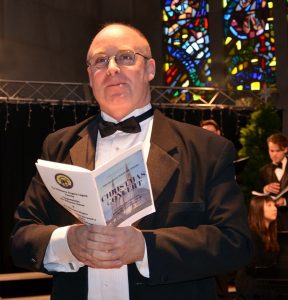 In August 2019 we welcomed Dr. Ted Latham as the 10th Director of the Villanova Singers.

Dr. Edward D. Latham (B.A., M.Phil., Ph.D., Yale University) is Director of Liturgical Music at St. Thomas of Villanova Parish in Villanova, PA and St. Katharine of Siena Parish in Wayne, PA, and Associate Professor of Music and Coordinator of the DMA in Music Performance at Temple University’s Esther Boyer College of Music and Dance in Philadelphia, PA, where he was the recipient of the 2008 Lindback Award and the 2007 Teaching Academy Award for excellence in teaching.

He is a Research Associate in the Department of Greek, Latin, and Classical Studies at Bryn Mawr College, where he directs the 30-voice Bryn Mawr Renaissance Choir. He also directs the 60-voice Main Line Singers. He is Executive Director of the Women’s Sacred Music Project.

Dr. Latham’s book, Tonality as Drama: Closure and Interruption in Four Twentieth-Century American Operas, is available from the University of North Texas Press.

We warmly welcome Ted and we look forward to many years of beautiful music.

The Villanova Singers, Villanova University’s highly acclaimed and versatile men’s chorus, dates back to 1953 when Harold Gill Reuschlein, Dean of Villanova’s prestigious Law School, established the group for the purpose of singing various types of music and enriching the cultural life of the University. Dean Reuschlein began a tradition of brotherhood in song that has grown to be one of the enduring and successful organizations on campus. Dean Reuschlein was known to say that he was “as proud of the Villanova Singers as I am of what the Law School has become.”

Dean Reuschlein was succeeded by the beloved Dr. Herbert Fiss, the second director of Villanova Singers. “Herbie”, as he was fondly known, directed the Singers for two decades (1957 – 1977) with an iron will and a tender heart. Under his direction, the Singers performed major works such as Beethoven’s Mass in C, Haydn’s Mass in Time of War and Lord Nelson Mass, and Missa Criolla by Ramirez. The repertoire included a wide range of liturgical and secular works, including contemporary pieces arranged by Mr. Fiss himself. Highlights included a command performance for Governor Raymond P. Shafer of Pennsylvania and a concert with Metropolitan Opera soprano Eileen Farrell. Among the many gifts he left the group, the most memorable is his crowd-pleasing arrangement of Pepita.

The Singers third director, upon Dr. Fiss’ retirement to Florida, was Rev. Denis Wilde O.S.A. (1977-1981). He then took a leave of absence to complete his Ph.D in Music from Catholic University and returned to direct 4 additional years (1984-1988). Father Denis, an accomplished musician and arranger, brought new music to the Singer’s growing repertoire while injecting energy into some of the all-time classics.

During Father Wilde’s leave of absence, Michael Luisi directed the group for three seasons (1981-1984). Mike, who participated in the 2008 Singers Legacy Weekend, passed away on February 24, 2010 at the age of 58 after a long illness.

Adriane Torrisi (now Sister Adriane Torisi) followed Luisi for two years (1988-1990). Adriane was multifaceted as a talented director and singer, performing with the Singing City Choir of Philadelphia. After leaving Villanova she spent six years as Music Director of the St John Eudes Music Ministry in Chatsworth, CA. In 1996, she entered the convent of the Sisters Devoted to the Sacred Heart. Sister Adriane is now based in Santa Ana, California.

Additionally, the Singers recorded two compact discs entitled Brothers in Song and Upon the Campus Green. Brian holds the record for years as Singers director (22) and elevated the Singers to new standards of musicality and brotherhood.

Tim Evers (2012-2015) became the seventh Director of the Villanova Singers. Tim had been the Singers’ accompanist for several years, and directed the Singers when Brian Meneely was ill, so the current Singers knew Tim well and were thrilled to learn he was taking the helm.

John Krystyniak led the Singers for two years (2015-2017). Prior, he was part of the music program at the Haverford School. John and his family now live in Texas, where he serves as Choir Director at Bridgeland High

An Enormous Song of Gratitude to…

Villanova Voices Director Christine Nass and Villanova Singer Thomas Palazzolo, who combined their talents to keep the Singers moving forward through the entire 2017 Fall semester while the search for a new Director was underway. Thank you both for service above and beyond the call of duty! Bravo!