In the year 1926, Professor Herbert Fiss came to the United States as a boy of fourteen from Breslau, Germany [which is now Wroclow, Poland]. After completing his musical studies, he specialized in directing German choral groups. In a short time, he became one of the leading directors in this field and most influential in keeping this German tradition alive.

Professor Fiss founded and conducted the Lehigh Valley Symphony and in the past has conducted for the Philadelphia La Scala Opera, the Starlight Operetta Company of Dallas, Texas, and the Wilmington Opera Company. He is currently the director of the Philadelphia Chamber Music Society. Professor Fiss is director of music in the music department of Villanova University, St Joseph’s College, and Rosemont College, and the Holy Family College. In his position as director of the singing groups of these schools, he is greatly loved and respected. Professor Fiss is also director of several singing societies in Pennsylvania and New Jersey. Under his expert leadership, one of his groups usually wins first prize in the singing competition conducted by the United Singers Federation of Pennsylvania and the Northeastern Saengerbund.

Professor Fiss came to the Reading Liederkranz in 1935 and this year marks this 25th consecutive year as the director of the chorus. In this capacity, he has made an inestimable contribution toward the preservation of German singing in Reading. The versatility of Professor Fiss is well known. His friendly manner and efficient teaching methods ensure progress and have led the choruses to fine accomplishments. 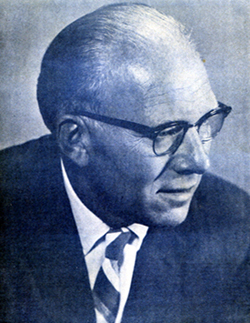 Mr. Fiss was an excellent musician, a consummate professional and a bona fide nice guy. He will be missed. I’m certain that he has already broken a baton directing a rehearsal of the Heavenly Choir. (Can Angels sing Pepita?) – Tom “Stacker” McConnell ’79

“Uncle Herbie” was a huge influence on all of us as musicians, which is what we became under his tutelage. We all loved him and tried to emulate his dedication to music while at Villanova and after. I believe that I still sing today because of what he taught me as a young man. – Don Hoyt ’70

But to have had the great fortune and honor of being taught and led by Herbert Fiss: that indeed was the essence of being a Singer. Stern one minute, joking the next, always striving for perfection. A master of both music and men, he made us want to sing, and sing well. Such was his skill that almost thirty years later I still remember what he taught. Whether it was in German, Spanish, Latin or Hebrew, the songs that he gave us are deeply embedded in my memory, as are his charm, wit and passion. I can say is that I am a far better man for having met Herbert Fiss. It was an honor and a joy to have sung for him. I go now, with the world a little quieter, and the music a little less sweet, but with memories that I will cherish forever. – Paul Belcastro ’77

Singing in the Singers for Mr. Fiss is one of the accomplishments in my life of which I am most proud. – Dave Koch, ‘74

Herbert Fiss was a great director and a great man. He was incredibly demanding and caring, and he brought out the best in each of us. He nurtured a joy of singing, and all the music he taught me remains firmly planted in my brain, more than 40 years after graduating. He inhabits my memories frequently, and I continue to thank him for his great gift of music. – Paul Orleman, ‘73

Mr. Fiss enriched all of us far beyond that which he taught us about music. He taught us the value of dedication, hard work, striving for perfection and professionalism…If we believe that “he who sings prays twice,” we can all rest easily knowing Mr. Fiss is happy in heaven. Just think of how many prayers were said through Mr. Fiss through the years! – Nicholas Moles ’75

I remember Mr. Fiss well and gladly. He’ll have that upstairs string section in shape in no time and those heavenly choirs of Angels had better get ready to “sing a little bit sharp.” – Tom Burke ’69

Dr. Fiss was a tremendous influence in my life. He was a true genius who had a deep love of music that he showered over us. His passion for music was contagious. I still sing today thanks to the confidence and inspiration instilled in me by Dr. Herbert Fiss. He will be missed. – Fred Malvagno ’70

He taught me to sing out and not be afraid of it. He was a major influence in my life. He started me out on a road I still travel, as I have continued to sing many operas & concerts in the last 30 years. I think of him fondly on stage because he’s one of the major reasons I’m still there today. – Paul McIlvaine ’71

Thanks to Glenn Reitmeier, you can listen to a five minute montage of Mr. Fiss directing a practice session of the Villanova Singers in his last year as Director, 1977. For those who had the privilege of singing for him, there is no doubt you will remember some of these “Mr. Fiss-isms”!